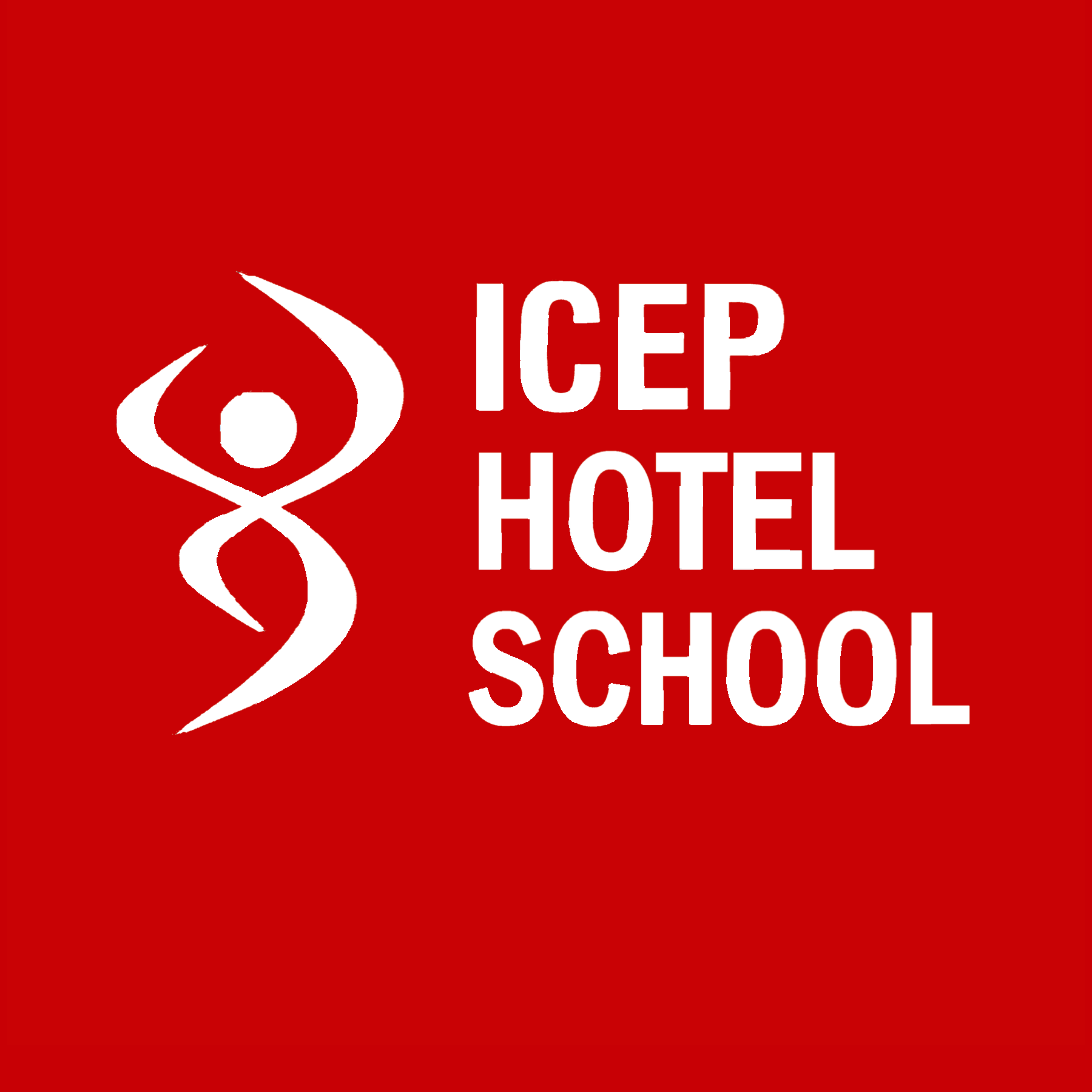 Learn to create 18 signature eclairs with Joakim Prat online
NEXT CLASS STARTS: May 23rd, 2022
Course and Support in English
Practical Guided Learning Experience
Training Certificate
Share this offer with your friends on:

You will learn to make 40 recipes + from scratch, using basic ingredients (pate a choux, creams, fillings, glazes and decorations).
At the end of the course you will be able to create 18 fabulous eclairs.

You will have 12 months 24/7 access to your account where you can revisit the lessons anytime you desire.
6 weeks Practical Guided Learning/course will enable you to make the eclairs in your own kitchen and submit your results for Chef's evaluation and feedback.

After completing all activities and submitting your practical assignments you will be rewarded with our Training Certificate.
about 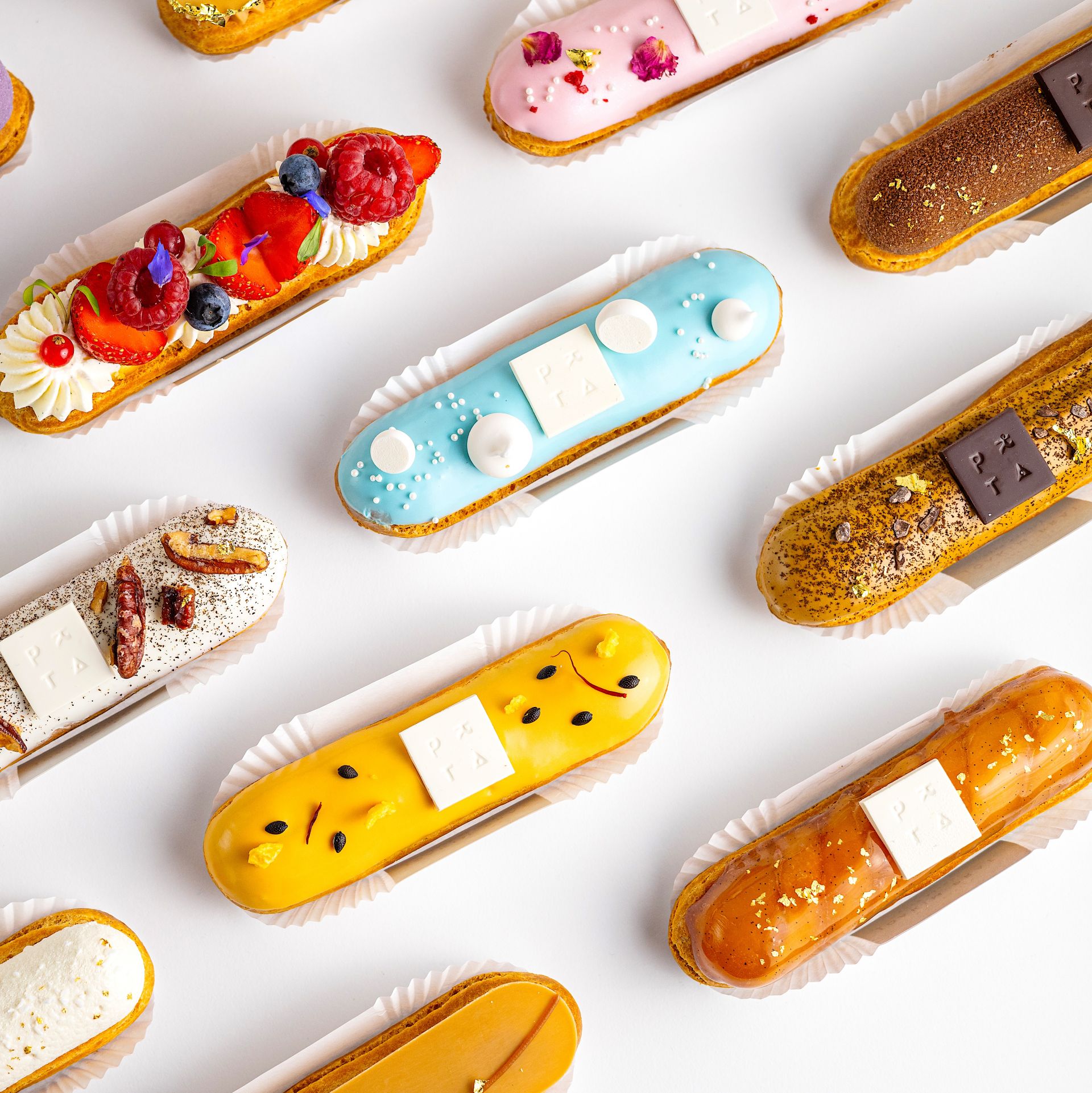 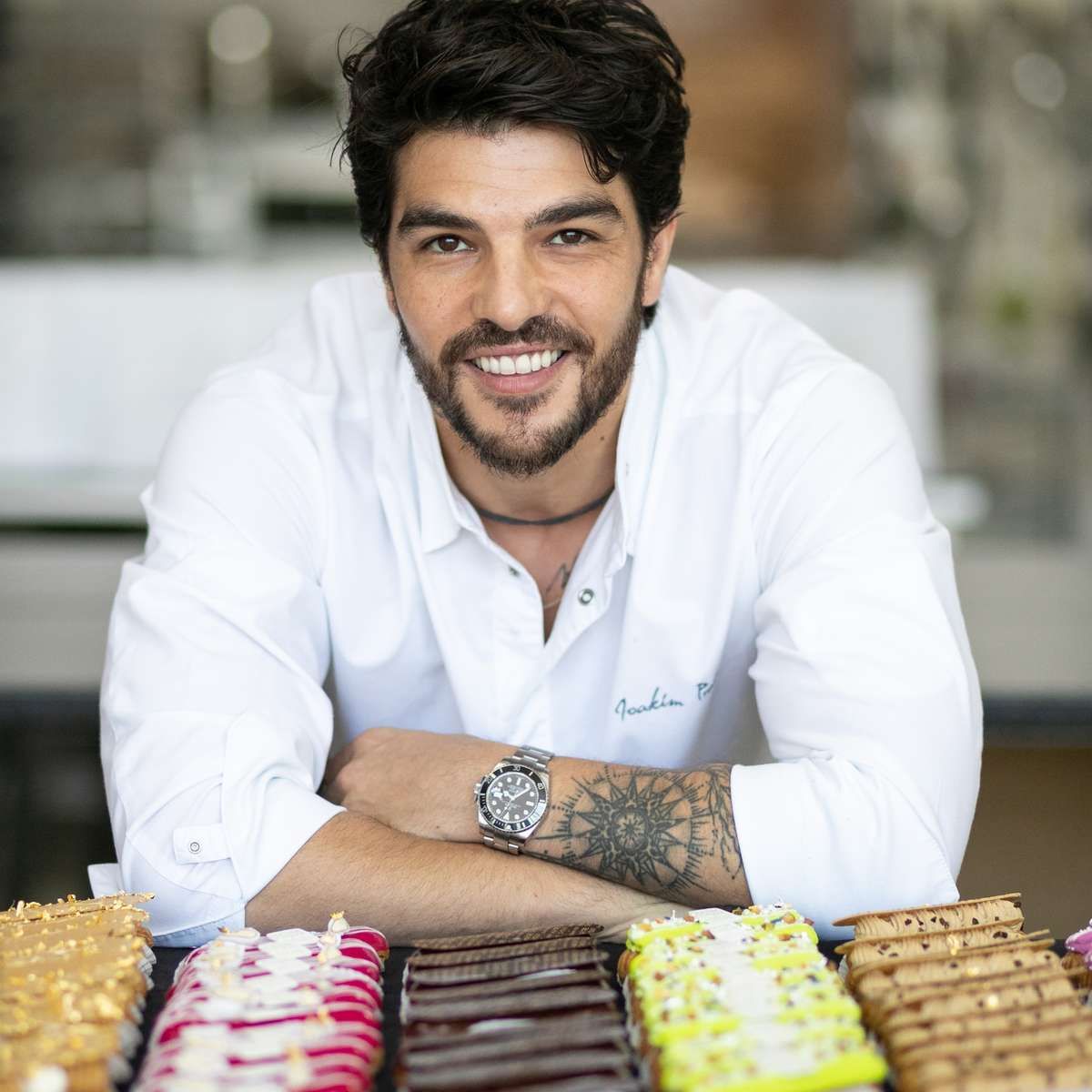 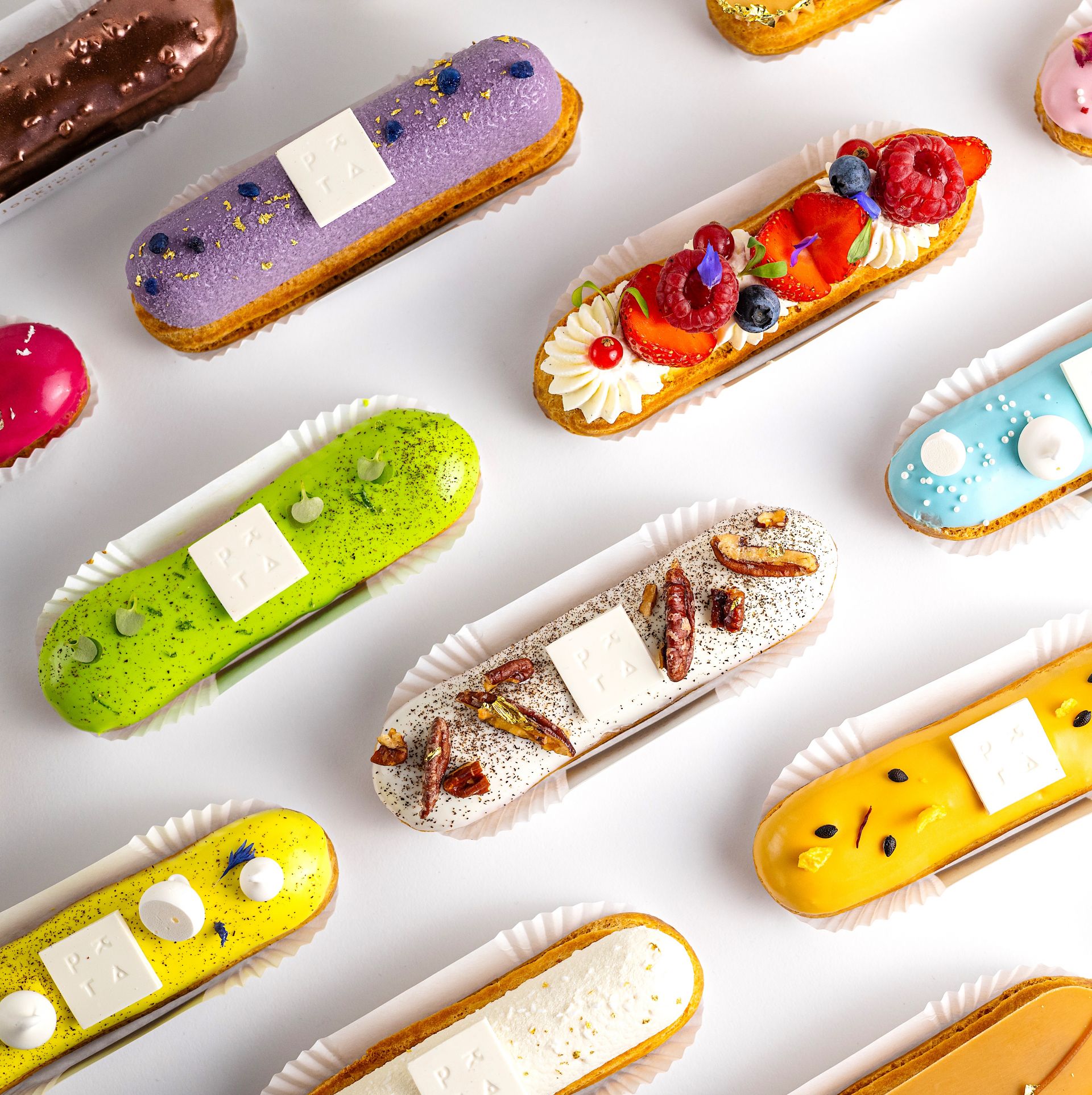 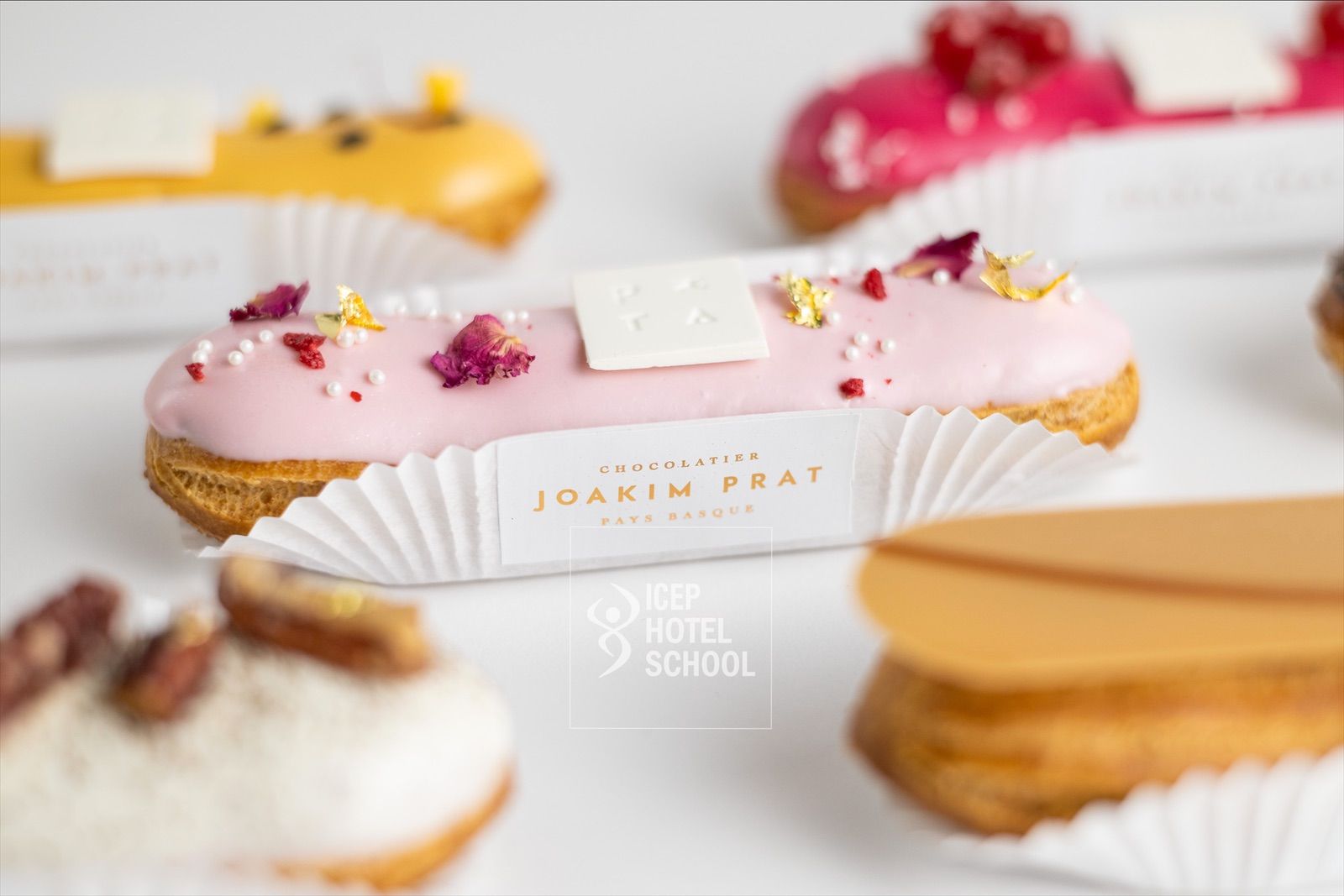 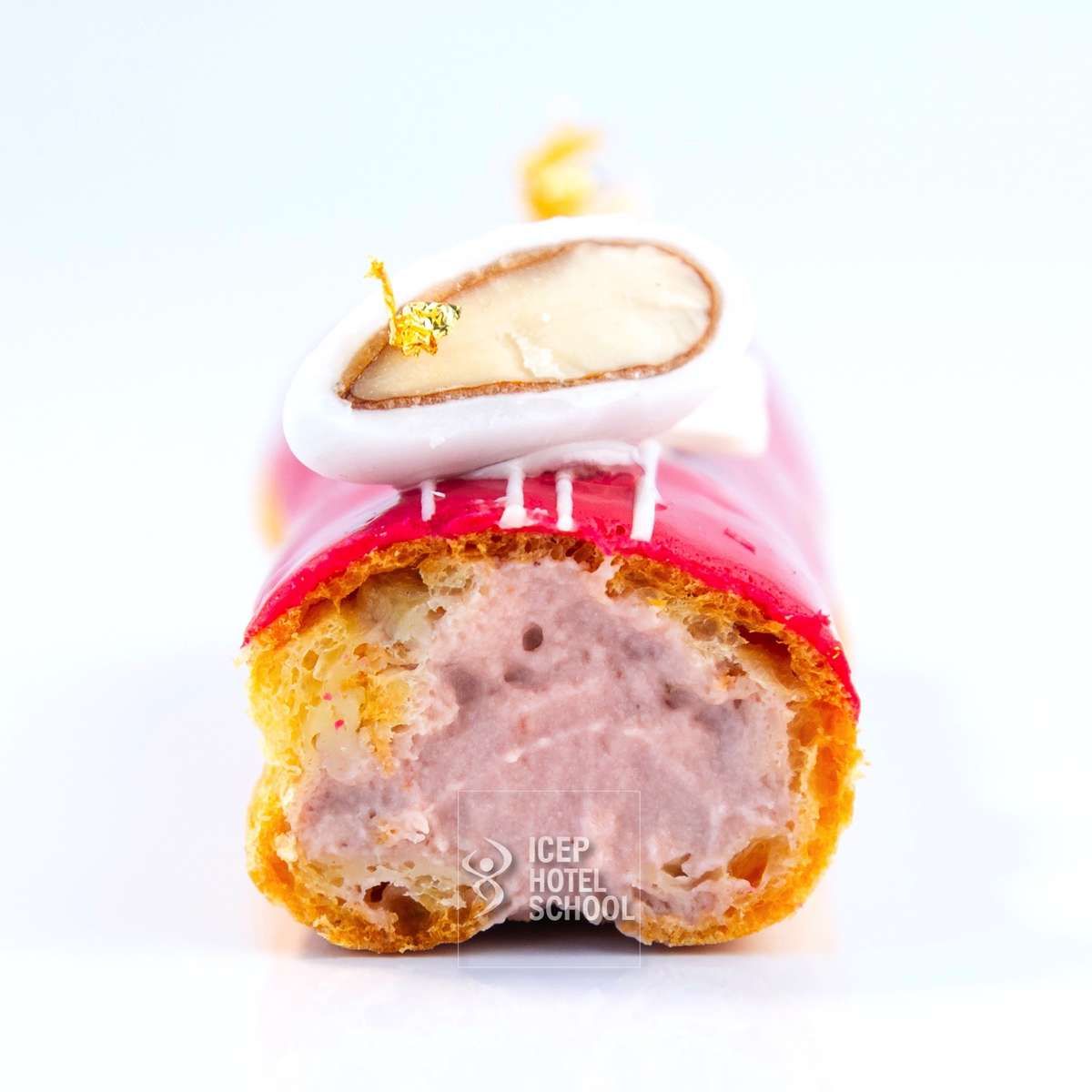 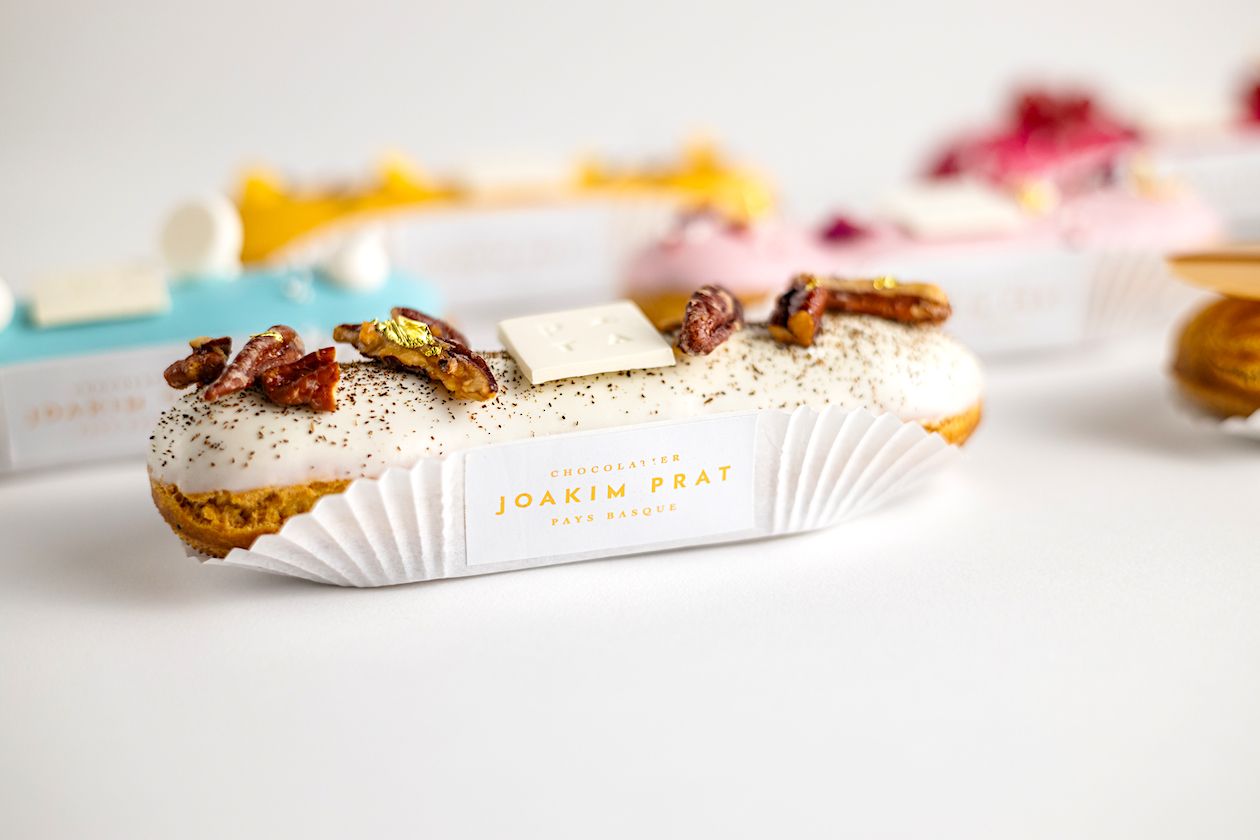 Come and discover the colourful and tasty world of eclairs
in this exclusive Online MasterClass with Joakim Prat!

Write your awesome label here.
Who can attend?

who want to develop their pastry skills and knowledge and prove them with a Training Certificate.

who admire Joakim's work and style and want to learn how to create his gorgeous signature eclairs.

who want to delight their customers with more glamorous and tasty products.

interested to continously develop their pastry skills and go to the next level.

Total Course Acces: 12 months access
Practical Guided Learning [PGL]: 6 weeks
In this course we learn to create the Pate a Choux (dough for choux, chouqettes and eclairs), different creams and fillings, glazes and decorations.
We learn how to assemble and decorate 8 beautiful signature eclairs.
[Click the arrows to display the content of each module]

You will have access to the list of ingredients and our recommendations to obtain the best results.

Write your awesome label here.
You will learn how to make delicious creams, tasty fillings and different pastry elements to create various textures:

All recipes made from basic ingredients.

Write your awesome label here.
You will learn how to make different glazes and create different elements for spectacular decorations.

Module 4: How to Create The Pecan Vanilla Eclair

Write your awesome label here.
From the different pastry elements we learnt to make in the first modules, we will create a collection of signature eclairs, assemble and decorate them to obtain a fabulous look.

Write your awesome label here.
Total Course Access: 12 months access
Practical Guided Learning [PGL]: 6 weeks
After completing Course 1, we move on to the next level.
Under the guidance of Joakim we learn to create more complex eclairs with different pastry elements and techniques: macarons, mousses, velvet glazes, chocolate decorations, etc.
By the end of the course we will create 10 fabulous signature eclairs.
[Click the arrows to display the content of each module]

Write your awesome label here.
You will learn how to make delicious creams, tasty fillings and different pastry elements to create various textures:

All recipes made from basic ingredients.

Write your awesome label here.
You will learn how to make more complex pastry elements we will use as top decorations for our sliced eclairs: mousse tops with inserts, macarons, tatin top, etc.

Write your awesome label here.
You will learn how to make different glazes, chocolate decorations and how to create elements for spectacular decorations.

Write your awesome label here.
From the different pastry elements we learnt to make in the first modules, we will create a beautiful collection of signature eclairs, assemble and decorate them to obtain a fabulous look.

Write your awesome label here.
YOU WILL GET:

Using latest technology and user friendly online learning software, once you have registered for this course, you will get access to your Course Player to get ready and start your learning.

Over 400 minutes of pre-recorded Full HD Video Lessons with Joakim teaching you step by step how to create his signature eclairs, showing you his pastry techniques and recipes. Can be viewed anytime from anywhere.

Get your Training Certificate 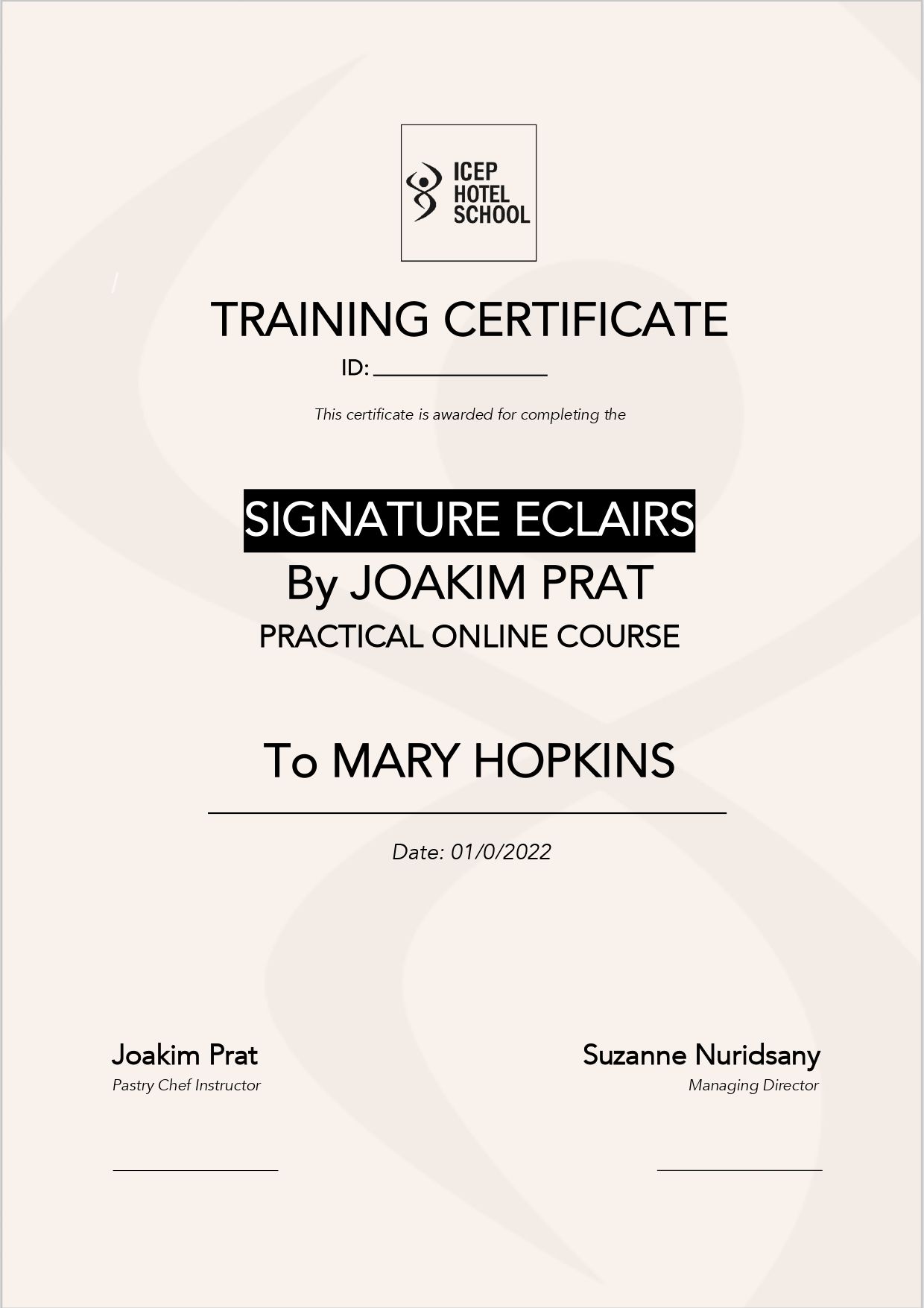 Joakim’s story is absolutely impressive. He describes himself as a representative of the new chefs generation, young, creative and modern but with strong classic French pastry skills.He was born and raised near Biarritz, in the Basque country in South West of France.

He fell in love with the pastry world at the age of 15. At only 25, Joakim took over the Head Pastry Chef position of Can Fabes, the first 3 Michelin starred restaurant in Spain.

Joakim also won the golden medal for UK Best Dessert of the Year 2014 and was awarded as UK Rising Talent at UK Pastry Open World Cup 2013, both in London.

For a successful user experience without interruptions, we recommend viewing the Video Lessons on your PC, laptop or tablet. You will also need a good internet connection.

To START your Practical Guided Learning Plan, you will need ingredients, utensils and kitchen equipment to prepare the recipes in your kitchen.

Mainly we use basic ingredients you can find at local market or professional shops.

We will provide you a list of ingredients, utensils & equipments, together with our recommendations of where you can purchase them.

We have limited spots per group, so make sure you book yours.
Register with our special offer
and start your learning today :)

HURRY UP, THIS OFFER EXPIRES IN....

What is the difference between on-site and online course?
On-site MasterClasses are intense 3 to 5 day courses organised in Bucharest, Romania in groups of 14 to 16 students.
Courses are hands-on giving you the opportunity to experience working with our Chefs.
Recommended for students with some baking or pastry experience.
Online MasterClasses can be taken from anywhere, anytime and by anybody.
You can study according to your schedule, from the comfort of your home, without having to interrupt your work or travel abroad. All you need is a laptop or PC, good internet connection and the desire to learn. It's a 6 weeks guided learning experience/course with 12 months access to Video Lessons and online materials.
During 6 weeks of guided learning, we recommend to invest at least 10 to 15 hours/week, to go through video lessons several times and follow through all your practical assignments, to get the most out of your course. After all, practice makes perfect!
Online MasterClasses can be taken by both home bakers and professionals. They are designed to start with basic recipes, carefully guiding you through with step by step videos towards more complex eclairs.
Video lessons can be revisited as many times as you desire, during the 12 months access period.
Is this a theoretical or practical course?
From our experience as educators, we believe the best way to learn is combining theory with practice. This is the principle we have structured our course around.
This course combines:
Demonstrative Video Lessons [Chef demonstrates step by step each recipe] with
Practical Assignments [Students reproduce in their kitchen the recipes and submit the results;
Chef's Evaluation & Feedback on submitted assignments.
What does Guided Practical Learning Experience mean?
One of the strong parts of this course is the 6 weeks Practical Guided Learning [PGL] with Chef Richard Hawke and ICEP Team.
Your practical learning experience will consist of:
Printable PDF Materials [Resource Center]
Pre-recorded Full HD Video Lessons with Chef
Practical Assignments (reproduce a minimum of 2 eclairs/course) in your own kitchen and submit the results);
Chef's Evaluation and Feedback on submitted assignments;
Support;
Access to our International Pastry Community.
How long does the course take?
The course lasts 12 months counting from your enrolment date.
After registration, you will receive gradual access to learning materials (each week you will receive 2 or 3 modules to study). You will have to complete the modules in the order they have been structured.
During 6 week Practical Guided Learning you will have access to ICEP Community to communicate with Chef & ICEP Team, upload your work and receive feedback.
At the end of the 12-month period, you will be able to prolong your access to the content by enrolling into our Alumni Program.
How can I access the desired course?
First step is to register and book the desired course and start date.
Only paid accounts will have access to premium features of our course.

The platform can be accessed from PC, Laptop, Tablet or Mobile phone, although for the best user experience we recommend to use a big screen device.
Can I access the modules in the order I want?
Each course is structured in modules and lessons.
After registration, you will have access to the modules gradually from your account. For the best learning experience we recommend to go through the learning materials step by step according to the course plan.
What are the practical assignments and why do I need to submit them?
Our course is designed as a Practical Guided Learning Program.
We believe the best results you can obtain by combining theoretical learning with practice.
You will have a minimum of  2 practical assignments to submit, consisting of making 2 of the wonderful eclairs of your choice and submitting the results of your practice together with a description of the process and challenges encountered.
Your Assignment will be reviewed by Chef and you will receive Chef's Feedback.

Please have in mind that in order to be rewarded with our Training Certificate, you have to complete all Learning Units and submit a minimum of 2 Practical Assignments.

If you are not interested in obtaining the Training Certificate, you can choose to only follow the Video Lessons without submitting Practical Assignments.

What happens if I don't submit assignments on the indicated dates?
You can choose when to submit Practical Assignments according to your schedule by the end of the course.
If you are not able to submit the 2 Practical Assignments, you will not obtain the Training Certificate.
You will also have the option to extend your Guided Learning with another 6 weeks at an extra cost allowing you more time to practice and submit assignments.
Will I receive my Training Certificate if I fail to submit my assignments?
You will receive your Training Certificate only if you successfully submit the Practical Assignments by the end of the 6 weeks Practical Guided Learning (PGL).
In case you were not able to do so, you will have the option to apply for an extension of another 6 weeks of PGL with an extra cost.
Can I extended my Practical Guided Learning?
Yes, you can apply for an extension of 6 weeks of PGL at an extra fee. Please contact Support at online@icephotelschool.com.
Can I access the learning content after the 12 months?
Once the 12 months of access to the Course have passed, you can prolong your access through the Alumni Program. For more information, please contact Support at online@icephotelschool.com.
I want to learn more. What other courses you recommend?
Continuous learning is the best investment in yourself.
If you would like to stay with us and learn more, we have a few recommendations for you:
You could continue your online learning experience by registering to other Online Programs;
You could participate into On-Site MasterClass in Bucharest, Romania.

Can I take this course if I don't have professional experience?
You do not necessarily need to have previous professional experience or knowledge. It is more important to have the desire and motivation to learn and invest time to do so.
I don't speak very good English. What other languages is this course available? What do you recommend?
All learning materials for this course are in English (Course Book, Video Lessons, Support, Live Webinars). If you can understand and can speak & write basic English, you will do just fine.
I am not computer friendly. Will I be able to follow through the course?
<div class="lw-widget-in learnworlds-main-text learnworlds-element learnworlds-main-text-very-small" data-element-id